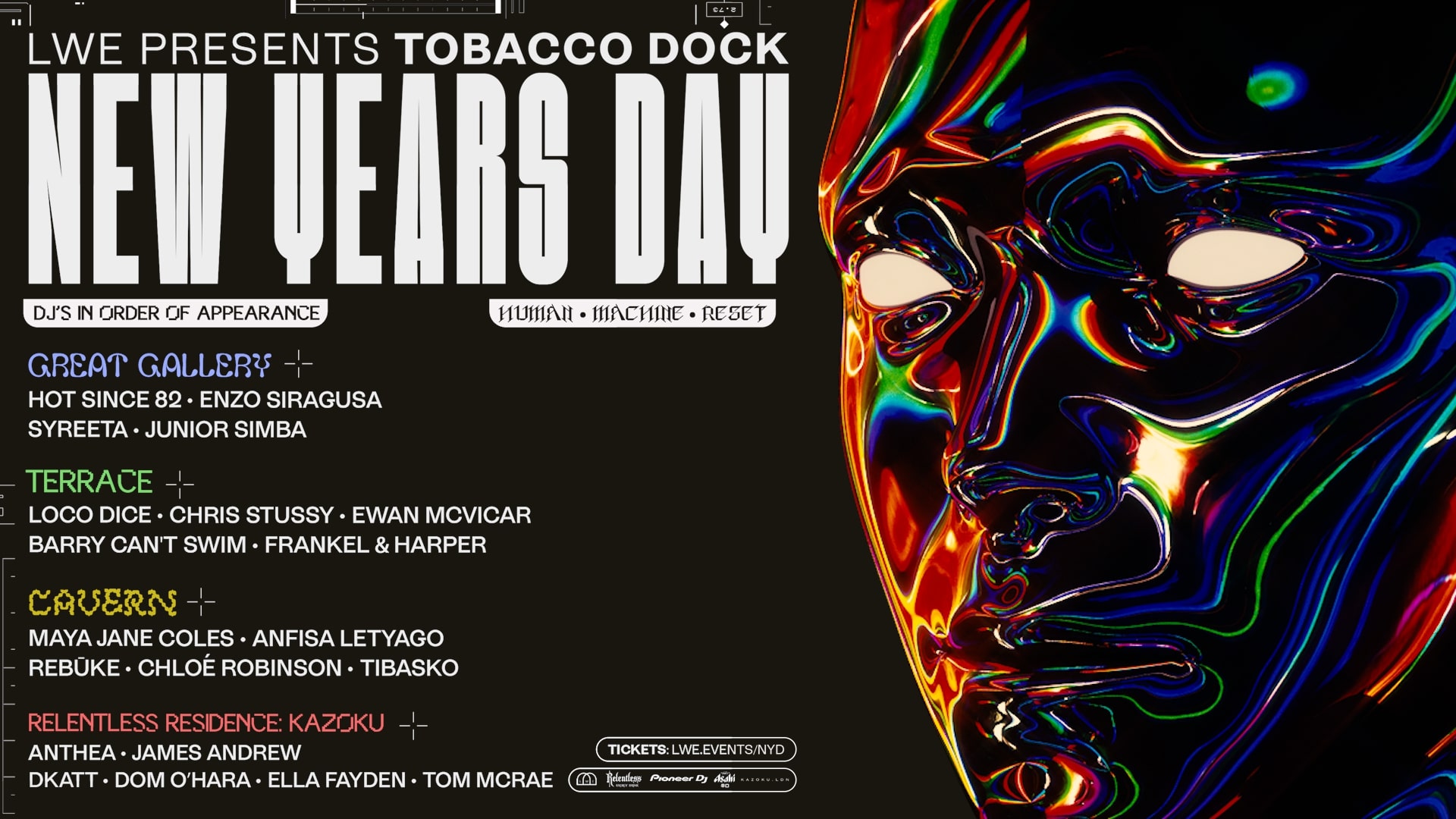 London’s biggest New Year’s Day party and LWE’s flagship indoor event, returns on Saturday 1st January 2022 at the Grade 1 listed Tobacco Dock. Expect a session of unparalleled underground sounds and bespoke production as we embark upon the first LWE NYD show in four years. As always, there shall be an exceptional lineup across multiple rooms...

Kicking off the first wave of artists is distinguished Fuse label head and selector extraordinaire, Enzo Siragusa. With headline appearances at clubbing meccas like DC10, Amnesia and Panorama Bar, the notorious party starter heads a reputation as one of the world's leading DJs. Enzo is guaranteed to push our world class sound system to its limits with his high-octane sound.

Fresh off the back of his sold out August showcase at Number 90, the lineup also sees the addition of dancefloor juggernaut Hot Since 82. The Knee Deep In Sound label boss has had a jam-packed restart to tour life with headline shows across the worlds biggest stages including Exit and Arc Music Festivals. He is bound to kick off the new year with a bang at London’s most esteemed musical playground.

Fellow seminal figure of the global dance scene, Loco Dice. Those who were at Tobacco Dock in December 2019, for our Horizon 2020 outing, will remember the Desolat head honcho is unmatched in his all encompassing selections and unique mixing style. He will no doubt shake Tobacco Dock with another unforgettable set.

Joining the already spellbinding lineup is electronic music’s leading lady and I/AM/ME label boss, Maya Jane Coles. With a history of gracing the cover of Mixmag and playing at the seminal clubs such as Fabric, she undoubtedly has a reputation as one of the world's leading DJs, and is guaranteed to push our world class sound system to its limits with her high-octane sound.

Fresh off the back of her Speicher 118 EP,  the lineup also sees the addition of Naples based Anfisa Letyago. Having performed alongside industry heavyweights such as Jeff Mills and Eric Prydz this year alone, Anfisa is sure to deliver an unforgettable set. Also joining us will be Anthea. With appearances at major events such as Waterworks Festival this summer, and releases on eminent labels such as VIVa MUSiC and Desolat, she is bound to kick off the new year with a bang at London’s most esteemed musical playground.

Tipped as one of Annie Mac’s New Names for 2021, Barry Can’t Swim, known for producing jazz-inflected house tracks, will be bringing his unique vibe to the day’s events. London based Chloe Ribinson will be joined by Chris Stussy. Purveyor of punchy minimal beats, and regularly performing at sell out shows of labels such as PIV and Eastenderz, Chris will no doubt shake every corner of the room.

Nominated in the Breakthrough DJ category at the DJ Mag Best of British Awards in 2020, Scottish supertalent Ewan McVicar will be sure to shake every corner of the room. Already a core member of Patrick Topping’s Trick collective, the bold young talent shows no signs of slowing down. The mind behind hard-hitting productions such as this year’s release ‘Tell Me Something Good’, has no bounds when it comes to starting a party.

Man of great musical diversity, Junior Simba will be making his mark on the day's events. Originally from Zimbabwe, Junior draws on the sounds of Rhumba, Kwaito and Afro-house around which he was brought up. He is sure to bring something unique to the day's celebrations. Also bringing a heavy dose of audible energy is a man no stranger to residing at the top of the Beatport charts with his heavy-hitting productions, Rebūke

. Fresh off the release of his remix of ‘Savage and Beyond’, we eagerly anticipate the Irish aficionado as we look forward to him sending a lively display of ear-shattering techno around the room.

Alongside these exciting names will be SYREETA. Having appeared at large scale events such as Parklife festival, she is accustomed to taking a large crowd on a journey with her well-informed track selection. Chosen by BBC Radio 1's Pete Tong as Future Stars of 2021, Tibasko, or Ken Petalcorin and Andy Bowden as they are otherwise known, have gained the attention of Annie Mac, Danny Howard, Pete Tong, and have had  their productions supported by the likes of Denis Sulta and The Blessed Madonna. The duo are primed for a spectacular showcase.

Further additions include founders and Managers of Council Work Records, Frankel & Harper as well as James Andrew. Alongside these trailblazers, Kazoku residents Dkatt, Dom O’Hara, Ella Fayden and Tom McRae will all be bringing their unique musical flair to the day's celebrations.

With a show full of world class artists, this New Year’s Day is sure to be nothing short of sensational.

Ahead of LWE presents Tobacco Dock NYD at Tobacco Dock 12pm - 23:00pm Saturday 1st January, please read this document for all the information you require to have a great time.

No ID, no entry

We will always refund the face value of your tickets in the event of cancellation. Tickets for postponed events will be automatically transferred to the new date. Refunds will be issued on request if you are unable to attend. Booking fees are generally non-refundable and will be determined by the ticket agent you have purchased from.This only applies when the event can no longer go ahead or is rescheduled due to COVID.